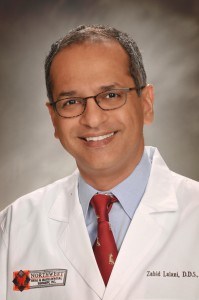 Dr. Lalani is a native of India and completed his education in dentistry there. He was the valedictorian of his dental school class, recipient of the “Best Graduating Student” award by his dental school, and received an award for “Outstanding Achievement” during four years of dental school by the International College of Dentists.

Dr. Lalani completed post-graduate training in Oral & Maxillofacial Surgery from his alma mater and proceeded to Scotland and England to continue his training. He completed the required training and examinations for Fellowship in the Faculty of Dentistry of The Royal College of Surgeons. Dr. Lalani then came to Houston to start his training in an integrated Oral & Maxillofacial Surgery/Ph.D. program at The University of Texas Health Science Center and affiliated hospitals of The University of Texas Medical School and Baylor College of Medicine. His research focused on the molecular basis of wound healing, and it formed the basis of a NIH and a Department of Defense grant. He received an award for best Ph.D. thesis in the Medical Faculties by Sigma Xi Society – Texas Medical Center Institutions & Rice University Chapters.

Dr. Lalani is a Diplomate of the American Board of Oral & Maxillofacial Surgery and a Fellow of the Royal College of Surgeons of England and Ireland. He is part of a small group of surgeons in the U.S.A. who are Diplomats of both the American and British Boards. He is also a Diplomate of the National Dental Board of Anesthesiology and a Fellow of the International College of Oral Implantology.

Dr. Lalani joined Northwest Oral & Maxillofacial Surgery in 2005. He practices the full scope of his specialty in both office and hospital-based settings. He maintains surgical privileges at Memorial Hermann The Woodlands Hospital, Houston Methodist Hospital, and Texas Children’s Hospital.

Dr. Lalani holds appointments as a Clinical Assistant Professor of Oral & Maxillofacial Surgery at Weill Medical College of Cornell University and at the Houston Methodist Research Institute. He is an instructor in Advanced Cardiac Life Support at the Texas Medical Center Institutions. He maintains an active dental license in the states of Texas and Washington, and holds certifications in Basic Life Support, Advanced Cardiac Life Support, Advanced Pediatric Life Support and Advanced Trauma Life Support. Dr. Lalani serves as a delegate from the state of Texas at the American Dental Society of Anesthesiology and is a Fellow of multiple state, national, and international organizations in his specialty. Through his exceptional achievement in head, neck and facial surgery, Dr. Lalani has also been inducted into the American Academy of Craniomaxillofacial Surgeons in 2016. The Academy is a group of oral and maxillofacial surgeons who are involved in the maxillofacial and craniofacial component of the OMS specialty as compared to the office-based procedures such as wisdom teeth extractions and the placement of dental implants.

In 2014, Dr. Lalani successfully completed a two-year MBA program, “Leadership in Healthcare” at Yale University in New Haven, Connecticut. He currently serves on the Board of Directors for The Yale Club of Houston.

Dr. Zahid Lalani is dedicated to making a positive impact on patient care.  Because of his passion and commitment to his profession and patients, he most recently earned the distinction of board certification in healthcare management and became a Fellow of the American College of Healthcare Executives in March 2019.  The American College of Healthcare Executives focuses on advancing its leaders and the field of healthcare management excellence.  Zahid S. Lalani, DDS, PhD, MBA is one of four dental professionals in the United States that has earned this outstanding accreditation.

Dr. Lalani lives with his family in Spring and practices at our Louetta and Magnolia offices.